There are thousands of different wild pollinators in Europe. They display a wonderful variety of sizes, shapes and colours and all do a valuable job. Pollinators help wild plants to reproduce, and crops to produce seeds, fruit and nuts and other tasty foods for us to eat.

In Europe, pollinators are mostly insects, such as bees, hoverflies, butterflies, moths, wasps, beetles and other fly species. Some of these species are domesticated, like for example a honey bee. Having a species-rich community of pollinators is essential to keep ecosystems healthy and resilient so it is important that we understand and protect all of our pollinating species.

Around 4 out of 5 wild flowers and crops need animal pollination, at least to some extent. Our food and health depend on it. The direct contribution of pollinators to the EU agriculture is estimated to be between €5 and 15 billion.

During the past decades, pollinators have declined in occurrence and diversity in the EU. Many of Europe’s wild pollinators are under threat due to unsustainable use of land, intensive agricultural management and pesticides, invasive alien species, environmental pollution, and climate change.

Wild bees such as bumblebees, mining bees and cavity-nesting bees are considered to be the most essential pollinators, followed by hoverflies. In 2017, a German study found that flying insect populations had declined by over 75% in just 27 years, with wild pollinators in particular facing a vast array of threats that are driving their decline. In fact, the IUCN European Red List of Bees revealed that around one in ten European bee species faces extinction.

However, the same report shows that the status of more than 50% of bee species in Europe is unknown, which means a far greater proportion of European bee species could be in trouble. Because of their important role in certain ecosystems, this threatens the health of nature, and our food security and wellbeing.

Do you want to know more about pollinators? Then grab our thematic brief...

The Science for Environment Policy's brief explains why are pollinators important for nature and human-wellbeing, why are they declining and what is the role of monitoring in stepping up the actions to reverse this negative trend. The report is written in the context of the implementation of the EU Pollinators Initiative, a strategy for the EU and its Member States to address the decline of pollinators. 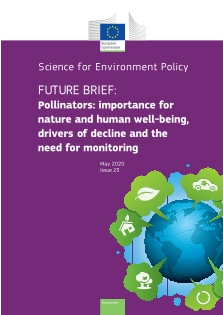 ...and visit the following areas on the Hive:

What are the population trends of pollinator species, threats they are facing and the consequences of their decline? See Data and Information section to find out more.

Pollinator monitoring is an important step in their conservation. To stop pollinator decline, we need a robust system for monitoring how species are faring and what is affecting the survival of pollinator populations.

The IUCN red list uses knowledge and data collected about organisms to evaluate the extinction risk facing species. The red list then helps to inform conservation action and policy decisions that can help these species.